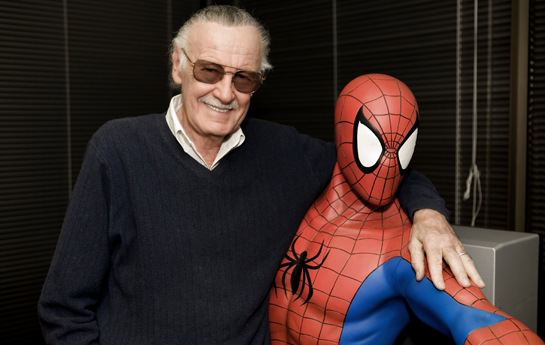 The Foundation has partnered with select organizations that provide opportunities and employment in the Media and Entertainment fields that pursue learning and growth for individuals. Stan Lee wanted to provide mentorships that would encourage students to pursue a career in these fields that provided for creativity and entertainment.

The Stan Lee Foundation has partnered with Unified Empowerment Incorporated (UEI), a 501(c)3 charitable organization that finds job opportunities for people with severe disabilities (any disability that keeps a person from holding a full-time job). The initial focus for this program is to train people with disabilities, specifically autism for this first project, to learn specific jobs within the film trades while working on production and potentially post-production of the film.

The proof of concept will be developed within the program that is producing a short film, Othello-san, owned and produced by Red Zeppelin Productions (RZP). RZP has recently produced and distributed a multiple award-winning feature film TRI and several other award-winning short films since its inception. It currently has several projects in pre-production and in-development with compelling stories and characters.

The Virginia Film Office has provided financial support to produce these movies and is also willing to provide support for this training program. This program will allow for the State and/or the Federal Governments, as well as other funding charitable organizations that may provide additional grants to train people with disabilities to get jobs in the film industry. There are many disciplines in the film and entertainment industries that can easily translate to related work in other industries as well.

UEI is a registered SourceAmerica Non-Profit Affiliate (NPA). This means that UEI can obtain government and corporate contracts and can service them specifically because it can employ people with significant disabilities. SourceAmerica links Federal and private customers who need products and services, conducts research, runs projects and develops programs to advance their mission of full and fair employment for people with severe disabilities.

According to the AbilityOne Act, at-risk youth also qualify for this program, and this would provide an ideal opportunity for the Film Office to cultivate a workforce in key positions that have sustainable job opportunities that can be found in production work. Boeing has been successfully implementing a similar program for decades to support the construction of aircraft in Seattle, Washington.

Another potential example of a disability is Post Traumatic Stress Disorder (PTSD) and employing individuals with such a disability may qualify for grants through the Veterans Administration. They are actively seeking transferable skills for vets so that they can potentially get work after their service contribution. This program can also help to prove that this hands-on training program can be replicated and modified to train people with or without challenges that don’t necessarily fit the specific criteria within the definitions of severe disabilities.

The Stan Lee Foundation is pleased to have an alliance with Veterans In Media & Entertainment (VME) to provide access and opportunities in mentorships and internships. Stan Lee was a veteran who served in the US Army during WWII assigned to the Signal Corp. He was transferred to the Training Film Division given the military classification of “Playwright,” one of only nine men given that classification. Stan had been active with the VME having been a guest speaker for the VME Speaker Series, captivating large audiences of admirers and entertainment creatives.

VME was founded in 2012 as a grassroots movement and 501(c)3, VME is a professional association of U.S. military veterans working in, or aspiring to work in, media and entertainment. Members come from creative and corporate leadership positions to production trades and artisans, and at all career levels. With 3,300 members across the nation, their footprint is currently concentrated in film, television, commercial, digital media, theater, music, and gaming. VME is headquarter in Los Angeles with emerging chapters in NYC, Chicago, Nashville, Atlanta/Savannah, and Washington, DC.

Their mission to serve as the premiere alumni organization for veterans in media and entertainment by connecting qualified veterans to career opportunities such as jobs, internships and mentorships. In turn, their senior members serve as role models, mentors, and advisors to veterans new to the industry.