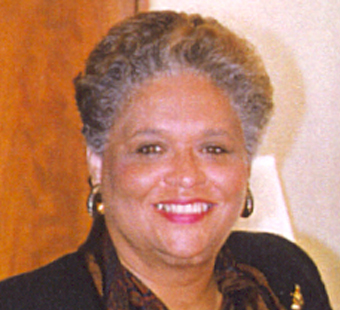 Sheila B. Coates – Board Member

Ms. Coates, a sixth generation Virginian, has been an activist for African-American families, with an emphasis on women, for more than two decades.  She is the founder of Black Women United for Action (BWUFA), a community service volunteer organization, which she has served as president since its inception in 1985.  Under Ms. Coates’ leadership the organization has grown from 14 Northern Virginia members to the distinction of being an international organization with ties in Africa, Canada and Europe.

As president of BWUFA, Ms. Coates successfully advocated the appointment of an African-American woman to the Board of George Mason University (a first in that institution’s history), and for a minority at-large seat on the Fairfax County Commission on Women.

BWUFA and Ms. Coates played a significant role in the depiction of an African-American woman in the final statue design of the Vietnam Women’s War Memorial.  Also, under Ms. Coates’ tutelage, the initiation of an annual observance of the Slave Memorial Wreath Laying Ceremony at Mount Vernon was developed.  The annual ceremony, developed over 15 years ago, has grown from a few local guests to travelers from all over the world, including Africa and Canada.  (There was one dedication ceremony prior to BWUFA’s involvement.)

Additionally under Ms. Coates’ direction, BWUFA adopted a 50-unit, federally subsidized neighborhood consisting of “at risk” families, developing a program focused on self-sufficiency.  This project is now a national model duplicated in New York and Florida.

Ms. Coates has testified numerous times on behalf of the African-American family before official committees and commissions, including an invitation to testify before President Clinton’s Dunlop Commission on Labor Law Reform.  She is an active participant in high-level roundtable discussions and has been invited to the White House under two administrations to serve as a spokesperson on public policy issues and family preservation.  She was elected to represent Virginia as a distinguished delegate to the National Summit on Africa held in Washington, D.C.  In addition, she was elected to the National Council of Women’s Organization Board, which represents over 150 women’s organizations.  She has traveled overseas by invitation to Africa, Israel and Switzerland, where she joined an international delegation in discussions on pertinent women’s issues.

Ms. Coates has received four gubernatorial appointments, including the Virginia Commission on Women, the George Mason University Board, and the Mount Vernon Ladies’ Association Advisory Board.  In addition, she has served on several other community boards and commissions, and has received numerous awards, including presentation of the Mickey Leland Community Service Award.  Ms. Coates is the recipient of the Congressional Black Caucus Spouses’ Foundation 2001 National Unsung Hero Award.  She also served as an advisory to Lifetime Television in New York City, was featured on the “Oprah Winfrey Show” and highlighted in the book Hard Won Wisdom, by Fawn Germer, focusing on fifty global extraordinary women.  She continues to serve as a speaker for the Open World Forum to Russian women’s delegations, sponsored by the Library of Congress.

Ms. Coates served thirteen years as an Instructional Aide with the Fairfax County School Board, working with the learning disabled.  Ms. Coates attended George Mason University, with a major in Public Administration and Political Science.